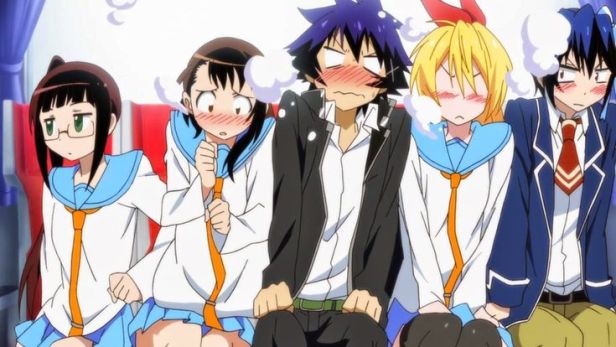 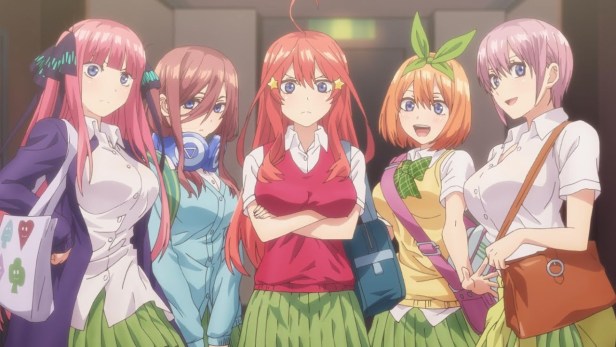 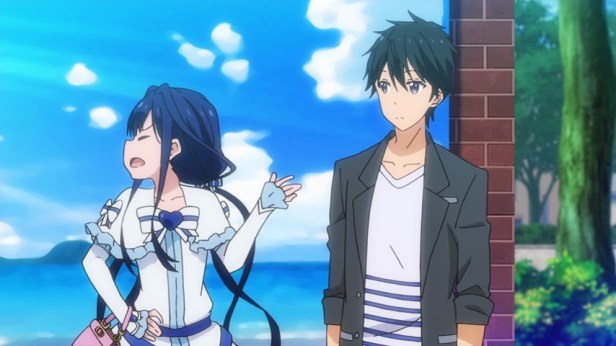 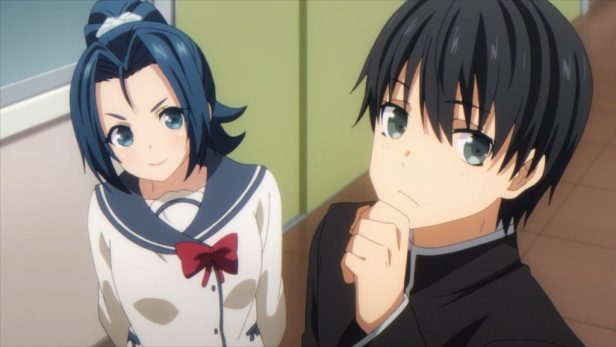 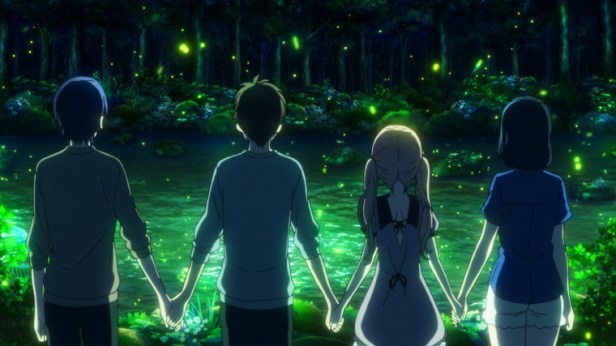 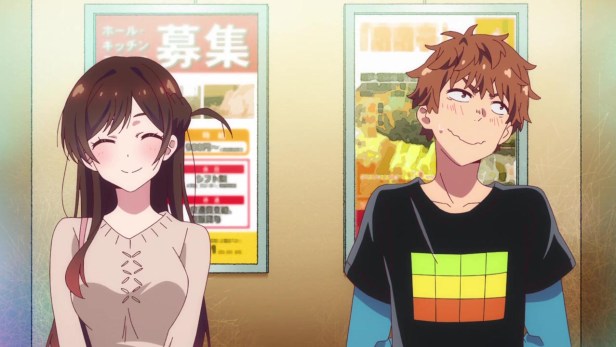 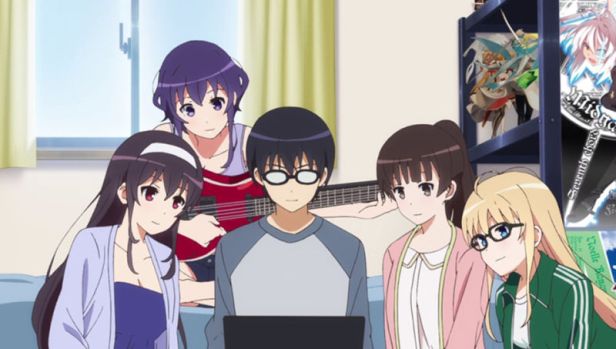 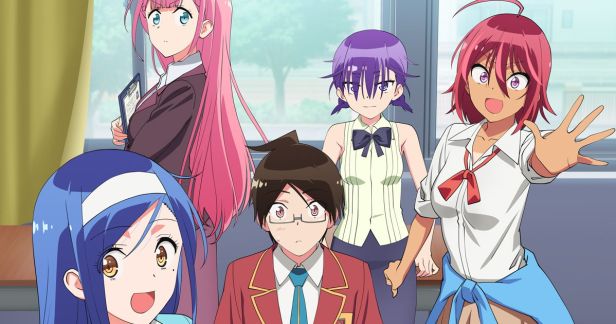 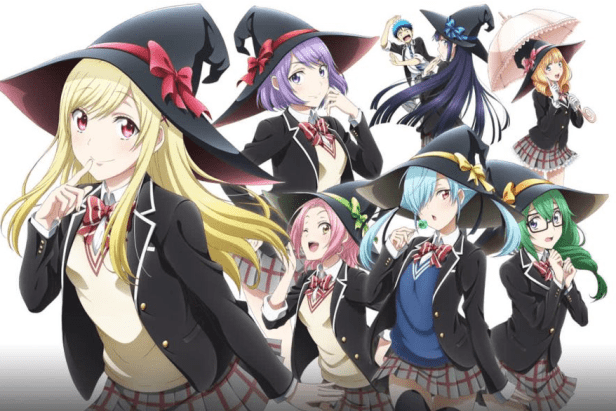 Sueharu Maru, once a child actor and now just a normal high school boy, is considered lucky to have the constant company of his beautiful and popular childhood friend, Kuroha Shida. However, when Kuroha confesses to him, he immediately rejects her. He still has his sights set on his first love – school idol and author, Shirokusa Kachi. Despite thinking he still has a chance, he finds out one day that she has a boyfriend which starts him on a complicated path of feelings.

=_= – I don’t normally use emojis in place of words, but when I realized that all the girls were his childhood friends, I could only squint at the screen lest the full genius and madladdery of that creators hit me full-on in the eyes. Regardless, if you are looking for more anime recommendations like Osamake, then head on down below.

Ten years ago, Raku Ichijou made a promise with a childhood friend. In the present day, this heir apparent to an intimidating yakuza family continues to wait for his friend’s return while trying to be as uninvolved in family matters as possible. However, when a rival gang invades his family’s turf, the family leaders decide Raku should start a romantic relationship with the other chief’s daughter, Chitoge.

Both series start with a similarly set love triangle between what appears to be his childhood friend and a beautiful new challenger. However, things in both series become more complicated from there. Both shows are also the type of show where the girls seem pretty even in their chances throughout.

As his family is in some serious debt, Fuutaro Uesugi is a serious penny pincher. However, his great grades have landed him a higher than normal paying tutor job. The problem is that his five wards, all sisters, are dumb as door nails and think he is a complete idiot. However, to get his pay, he has to think of a way to get these five unique girls to study and learn.

Alongside a future marriage, one of the carrots that The Quintessential Quintuplets dangles in front of your face is that he met one girl as a child and thus would have a stronger bond. This would technically make both shows into romance anime involving childhood friends.

As a child, Masamune Makabe confessed his love to the wealthy and beautiful girl Aki Adagaki. However, she brutally rejected him and nicknamed him “Piggy” due to his chubby appearance. Fleeing to his grandfather’s in the country, Masamune toiled endlessly to become fit. Once he became skinny and handsome, he returns to his old neighborhood in order to wreck vengeance on the girl that wronged him. With the help of Aki’s maid, Masamune sets out to make her fall in love with him so that he can be the one to break her heart.

Both series feature the exploration of a relationship between a man and a girl he loved as a child. They do go about that exploration in different ways, though. Masamune-kun’s Revenge has a plot that starts off more malicious before softening, whereas sometimes Osamake feels like the reverse.

For Fans of Complicated Relationship Paths

Oresuki – Are You The Only One That Loves Me?

Jouro is your average high school boy that dreams of a love story. He is thrilled when he lines up two dates, but unfortunately, both girls confess their love for his best friend. Of course, his friendly face is just a façade. Schemer that he is, he decides to make his friend fall for one of the girls so he can swipe the other. Unfortunately, his efforts are threatened by Pansy, a gloomy girl who knows of his secret personality.

Both series are romcoms that both tried to do something subversive to the genre in order to breath in some new life. While Osamake takes itself serious some of the time, Oresuki goes comedy to the point that you wonder if it is a parody.

In order to encourage successful marriages and to combat the low birthrate, the Japanese government now assigns marriage partners at the age of 16. Unwilling to face the severe repercussions that come with denial, Yukari Nejima goes along with it, despite confessing to his long-time crush. However, is his reciprocated love doomed to be crushed when he gets his marriage notice?

Recently dumped by his girlfriend, college student Kazuya Kinoshita tries to fill the void with an app that lets him rent a girlfriend. While Chizuru seems like the perfect girlfriend, reading the reviews online, he finds out it is an act. He leaves her a bad review and this reveals her more sassy true self when she comes after him for it. Unfortunately, after his grandmother’s collapse, he introduces her as his girlfriend at the hospital, and thus they begin their fake relationship.

In many romance harem shows, there is usually that clear-cut “best girl,” but in both Osamake and Rent-a-Girlfriend, that line gets muddied. Both series also highlight the less-nice aspects of the girls competing for affection as well.

For Fans of Romantic Harems

Saekano – How to Raise a Boring Girlfriend

Tomoya Aki is your typical otaku who takes on part-time jobs to fund his anime and light novel obsession. However, one day when he was out riding his bike, he catches the beret of a girl and is so captivated by the scene before him that he sets out to create the ultimate dating sim. While he struggles to do so, he eventually recruits three of the school’s most popular girls, who also happen to be good at drawing, writing, and music as well as are otakus themselves. After some debate, each agrees to help make his vision come to life. In this new doujin circle, he also happens across the girl that inspired him, but she was not what he expected and certainly doesn’t stand up to his 2D expectations.

Both shows are romantic harems where the girls find themselves attracted to a main character that has a distinct talent for something. However, while Maru occasionally acknowledges his harem, Aki is almost always focused on his game rather than the girls who are focused on him.

In order to help his family out financially, Nariyuki Yuiga dedicated himself to becoming a high achiever in order to get a special nomination that covers future university fees. While he is constantly overshadowed by two other classmates in math and literature, he manages to get the nomination anyway with the condition he tutor these two other students in other academic areas. It turns out that these two girls that excel over him in those two subjects are mediocre at everything else.

Both series are about a main character that finds himself in a love triangle of girls who start to compete for his attention. Bokuben is a little more on the wholesome side compared to Osamake where the main character is more dickish on occasion and the girls have less wholesome motives sometimes.

Yamada-kun and the Seven Witches

Ryuu Yamada used to be a thug, but he wanted to change his reputation in high school. He went to a school where no one knew him, but by second year he was so bored that he became a slacker again. One day while on his way to the office, he trips and accidentally kisses a beautiful honor student. In a flash, they switch bodies and Ryuu is soon thrust into the world of school legend where seven beautiful witches can have their supernatural abilities awakened by kissing.

While Yamada-kun and the Seven Witches obviously has that whole supernatural kissing thing. What it most shares with Osamake is the unfolding nature of the show. The harem is built up, and as it goes, you discover the unique secrets on not only the new characters, but the older characters as well.

Do you have more anime recommendations like Osamake: Romcom Where The Childhood Friend Won’t Lose? Let fans know in the comments section below.