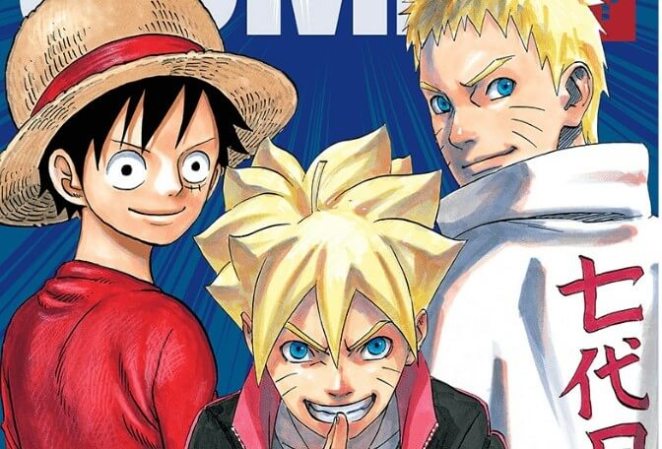 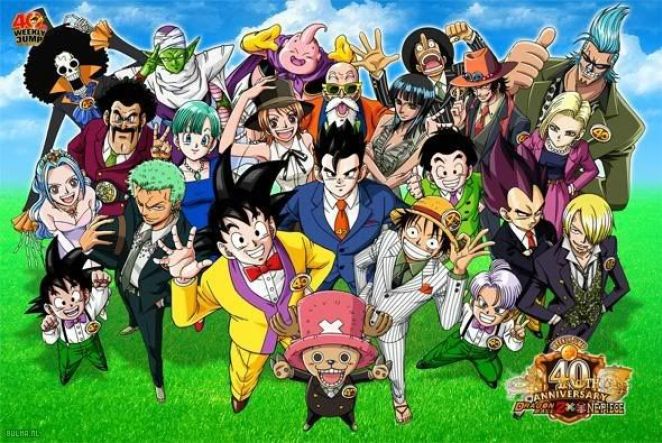 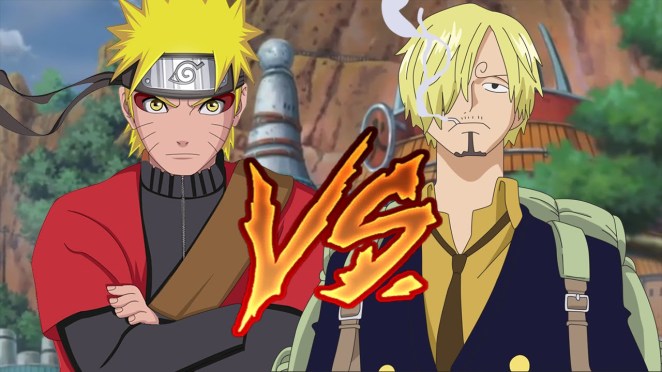 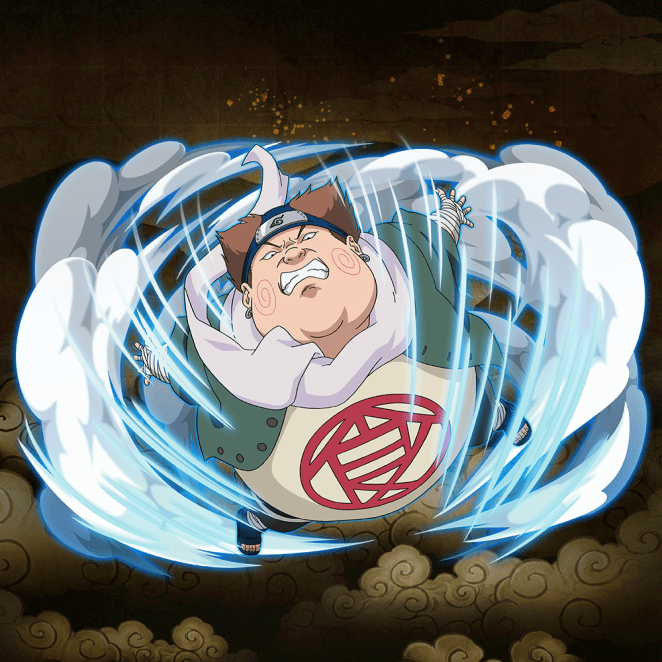 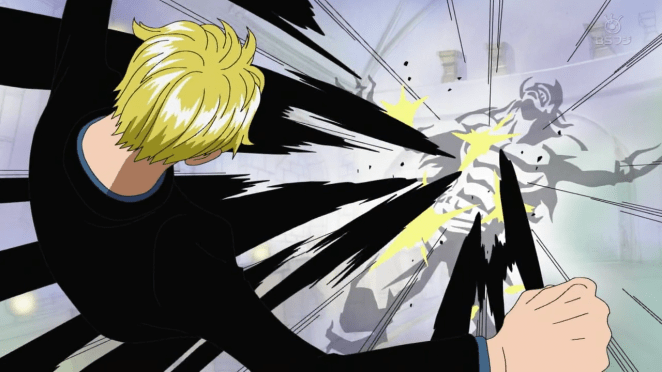 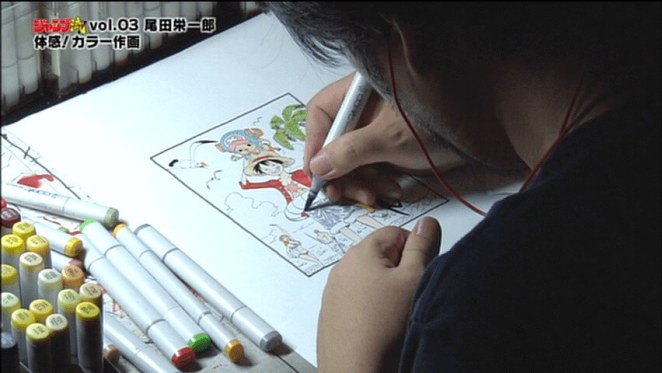 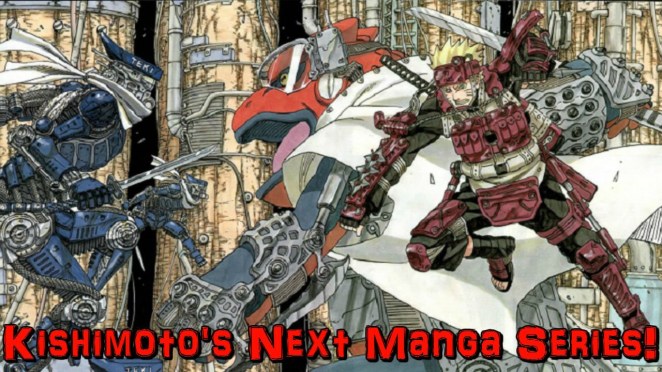 Today we were able to get our hands on a copy of this guidebook, which includes a transcript of a four-hour interview between the two Jump rivals and friends: Naruto‘s Masashi Kishimoto and One Piece‘s Eiichiro Oda.


Oda explains that Kishimoto’s calculation of a lot of factors, such as not using the color red that was most equivalent to “Luffy’s color,” and other such things, made it possible for both of these action/fantasy shonen manga to exist without too many similarities. Oda did the same thing when One Peice began a few years after Dragon Ball ended. He would make sure One Piece didn’t overlap with Dragon Ball, which was still on a lot of readers’ minds.


He made it more of an “adventure” piece and not a “battle” piece, while Naruto’s theme wasn’t so much the adventure, but the building of the village. One Piece had a pattern of increasingly more crew members being added, while Naruto had a lot of “friends” from the get-go to differentiate himself from Oda’s pattern.


As for overlapping factors, avid One Piece readers might remember this piece of trivia from Sanji’s origin: his original name was Naruto after the twirly pattern of his eyebrows. However, because Naruto started before Sanji’s initial appearance, Oda decided to change his name. If Sanji had appeared as Naruto, however, Kishimoto might have changed Naruto’s name to something else.

Oda also mentions the resemblance between Choji’s attacks and Luffy’s Giant Pistol attack. Unfortunately, that wasn’t something Oda could avoid, so he warned Kishimoto about it beforehand.


Oda: “It’s really not about drawing well. It’s about challenging yourself every time you do it — that’s how you should approach it . . . You have to think hard about it and draw with emotion.” Naruto Official Guidebook p. 50

Both authors also seem to like each others’ character designs. Oda mentions that Naruto includes a lot of elements you don’t see very often in manga due to Kishimoto’s admiration of many animators. Oda on the other hand, decided to stick with more primary colors rather than “elegant” ones due to his younger male target audience.


Oda: “The one that surprised me the most was when one of your bad guys turned invisible and went underwater. All you saw was this silhouette, and thought that was really well done (. . . )Well I used that as inspiration for my own invisible character (laughter).” Naruto Official Guidebook p. 50-49

Kishimoto’s homage to One Piece at the end of Naruto.

Approaching the End of the Manga Series

The subject of Naruto‘s final chapter comes up as well. Kishimoto explains that he had trouble trying to fit the end of the story into the allotted number of pages the editorial office at Jump assigned him. Oda mentions that drawing the last chapter/scenes of One Piece will be filled with “warmth,” but before reaching that point he’d have to go through the big final battle* that he’s already somewhat started to conceptualize. He can imagine it being tough to finish the story as planned without any extra chapters to add afterwards. While Kishimoto already planned to finish the series with one last fight between Naruto and Sasuke, it didn’t quite turn out exactly as he’d planned in the beginning of his serialization.


Oda: “When you’re illustrating something you’ve had in mind from the start, you can get tired of it pretty quickly. So if you think of something more interesting, you should really explore that. To not use something interesting you’ve come up with — that’s letting the reader down, too.” Naruto Official Guidebook p. 46

Lastly, what about Kishimoto’s next new series? Kishimoto explains how he’d love to write a science fiction series. Something involving flying through the sky because Kishimoto loves clouds. The reason why he was jealous to see Oda’s Skypiea Arc was because that meant he couldn’t use anything like that for Naruto. Apparently this is something Kishimoto’s really been hung up on, and Oda was well aware of his frustrations. Kishimoto was, however, happy with how well Oda did with the arc, andsince One Piece already did it, he would not.